The Healing Resonance of Churches: Cymatics in Sacred Spaces

Whether or not you are religious, for most, it is difficult not to feel a sense of uplifting wonder when walking through a grand cathedral, temple, or other sacred space. While the visible grandeur of these places may be the obvious reason for feelings of awe, researchers have recently discovered another probable cause for feeling at peace when visiting sacred sites.

In this article, we will cover healing resonance frequency experiments, observations, and discoveries that have recently uncovered the subtle energetic forces within cathedrals around the world. Utilizing cymatics, a technology that allows sound waves to be translated into visual images through the medium of either sand or water, we have discovered there is much more going on than meets the eye.

From these findings, there is evidence that points to the architects of these cathedrals having knowledge of cymatics healing frequency, and possibly the healing power of sound long before modern scientists did. Choirs, pipe organs, and the architecture itself may have literally been healing church attendees for centuries. The subtle energy of spaces is not limited to churches either, every natural and man-made structure emits its own subtle energetic frequency that we are inadvertently influenced by.

The Architecture of Sound by Tanya Harris

A fascinating read on this topic is a report by Tanya Harris. She visited various churches around Europe, and recorded the silence of each church for seven or so minutes, and then played the recordings back while recording the sound again to gain an amplified recording. Once she attained an audible sample, she created her own cymatic device and played the sound through light and water to observe the patterns created by the frequency of each church.

The results were nothing less than astonishing. The patterns produced resembled the classic stained-glass rose windows typically found in cathedrals. The resonant frequency of one church even displayed a five-pointed star that was in proportion with the golden ratio.

Click here to read Tanya’s official report on this subject.

Decoding the Mystery of The Rosslyn Chapel

This 15th Century chapel recently became more widely known through its fitting inclusion in the popular novel, “The Da Vinci Code” by Dan Brown. After hundreds of years, the secrets of the architecture were finally revealed to Stuart Mitchells and his father – a process that took the father and son duo 27 years to solve.

The Mitchells took a special interest in the patterns that are engraved in the unique cubed architecture that protrudes from the cathedral’s walls. The cubes are framed by carvings of angels playing music. By matching these patterns with cymatic frequencies, the Mitchells decoded a medieval sounding piece of music that is now known as the Rosslyn Motet.

A Modern Take on an Ancient Secret

The power of cymatic resonance within churches is not limited to the emissions of subtle energy from the architecture. Choirs also contribute to this unspoken aspect of the typical religious experience, as evidenced by a recent art installation. Inspired by a request from the Trinity Episcopal Cathedral in Portland, Oregon, artists Shelly Socolofsky, in collaboration with cymatic expert, John Stuart Reid, designed a video projection experience unlike any other.

Using a pool of water measuring 6 feet in diameter as their cymatic device, they made visible the sound of the Pilgrim’s Hymn, sung by the church’s choir. Although the project was created with traditionally Christian sounds, opening with the resonance of church bells, and ending with a portion of Bach’s Toccata & Fugue, the visuals are reminiscent of the mandalas found in Eastern mystic traditions.  The final result, named “Cauldron,” was projected at the church, attracting large crowds to see the unique, multimedia work of art.

Cymatics, Resonance, and Tones for Healing

Scientific research is verifying the cymatics healing power of sonic frequencies. Professor Sungchil Ji of Rutgers University conducted an experiment that concluded that red blood cells exposed to classical music had a significantly improved lifespan, in comparison with blood cells that sat in silence.

Because our bodies are made of liquid, the beautiful patterns made through the resonance of music and sound create healing patterns within us. As evidenced by Tanya Harris’ experiments, not all sounds need even be audible, simply by being near spaces or objects of noble resonance is enough to receive the amazing properties of subtle waves that contribute to the body’s well being.

The power of subtle frequencies is part of the inspiration behind our technologies, and many Subtle Energy programs come with audio files for maximum efficacy. Have you ever felt healed by music? Let us know in the official Subtle Energy Sciences online community.

Scientific Evidence for ESP from NASA, the US Government, and China

ESP is the ability to see or know something beyond what your five senses are cluing you into. There are several different types of ESP. 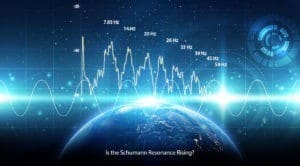 Is the Schumann Resonance rising? As one who works with subtle energies and frequencies on a daily basis, I’ve been asked this